It was only after I had taken early retirement that I finally had the chance to realise that early ambition to get involved in motor sport. Tim Allen, a BBC friend, suggested we join the Bristol Motor Club and that kick-started it all. After a season taking part in 12-car rallies (and making Tim all but throw up!) and marshalling at every event I could get to, I bought a Westfield so that I could ‘have a go’ at doing some sprints myself. 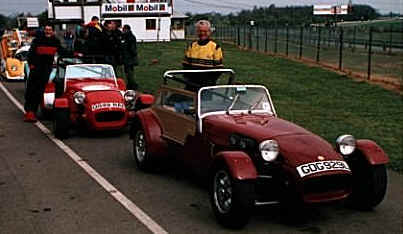 But it wasn’t that straightforward. I bought the car from Matt Rumney in September 96, and spent the winter getting the car just as I wanted it. In the Spring of 97, I booked a half day’s practice session at Castle Combe along with Dave Potts in his Westfield.

Unfortunately the fun only lasted about three laps – the cooling system wasn’t up to this treatment, a piston melted and the car expired ignominiously in a cloud of smoke! A complete engine rebuild followed, but on the day I got it home it suffered spontaneous self-combustion on only its second outing. I decided that I was probably destined not to be a Westfield owner!

Fortunately I was able to claim the market value of the car from my insurance. I sold the remains of the car to Nick Rainbow, who refurbished and disposed of the chassis, whilst the engine found its way into his brother Julian’s Fury sports car. (When Julian subsequently changed that to a K-series, Nick installed ‘my’ engine in his Westfield, where it remains to this day – 2016).

I had spent a lot of time and effort trying to make a used kit-car conform to my idea of what a kit-car should be – all ultimately to no avail! Now I felt the only way was to build my own from scratch. So after a few months researching the market, I had a test drive in a C C Cyclone. I was impressed by the nimbleness and relative sophistication of this Vauxhall-based, mid-engined design and duly placed my order. I started construction in January 98. It was an absorbing and rewarding project, and it was built ready for SVA testing and licensing in August that year. 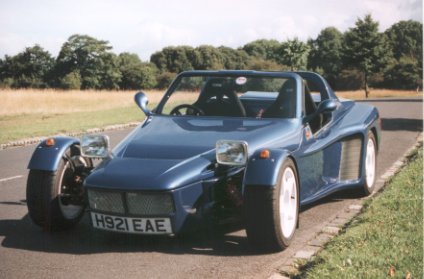 I enjoyed using it on the road for the rest of the year, and over the winter undertook a comprehensive engine rebuild. I also fitted an SBD induction and engine management system, which increased the quoted power output to 208bhp. By Spring ‘99 it was ready for a few competitive events.

First competitive outing of 1999 was the Wessex Sprint at Colerne in May. This produced a class 2nd for co-driver Robin Isaac and class 3rd for me. Not bad – although there were only five in the class! However, for the next event – Castle Combe sprint – I had some real competition. Not only that – I lost my first practice to a misfire, and a dragging clutch left me unable to change gear except in the most leisurely way. Result? A slightly embarrassing 12th in class (out of 15). The Two Clubs Sprint at Colerne on August bank holiday went a bit better. With the clutch and misfire problems sorted out, I managed class 5th (out of 7).

A chance encounter at a barbecue with a friend from my BBC days, Graham Wild, led to me inviting him to share the car with me sprinting on a regular basis. Graham responded enthusiastically so we booked a couple of entertaining afternoons at Haynes test track for Graham to get used to the car. I found him a nearly-new race suit owned by Adam Ford, David Potts’s cousin, and Graham bought himself a new Bieffe helmet to complete the safety equipment.
Our first event together was the BAC Pegasus Sprint at Castle Combe, where we managed 6th (me) and 9th in a large class of 20. Excellent result for Graham on his first outing, and his enthusiasm was fired to compete in a few more events in 2000. Graham proved to be the perfect sprint-mate; gently competitive, but also supportive and considerate; it was the start of an enduring partnership. 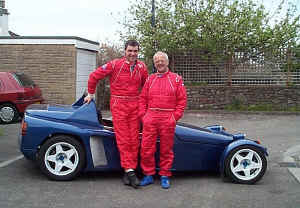